Being a statistic doesn’t stop at being accepted to college, or when you graduate with your degree, or after you’ve entered the work force, or when you’ve left the work force within 10 years. Although the initial sigh of relief after escaping a classroom filled with men who talked over me or didn’t trust my logic when discussing a question on a problem set felt freeing, it didn’t last long. Regardless of what workplace you might have entered and what the makeup of your office may be, the truth is that the statistics of the greater demographics within STEM are still stacked against you.

Only 24% of STEM jobs are held by women, although they make up 47% of the work force (Noonan, 2017). Although women make up 30% of STEM degree holders, they are less likely to work in the STEM field than their male counterparts (Noonan, 2017). Women are much more likely to leave tech industries than men – 53% compared to 31% (Beninger, 2014). Women of color make up an even smaller portion of those receiving bachelor’s degrees in STEM (National Center for Education Statistics, 2016).

Although I thought it was suffocating to find myself in an engineering class where I was often one of two or three girls in office hours surrounding by at least a dozen men, the reality is that only about 13% of those in engineering jobs are women (Silbey, 2016). I thought that if I could survive being called “mouthy” by male professors with decades-long careers in engineering, then I would be able to stand up against plenty more once I actually entered into the field. However, while the explicit examples of misogyny and sexism within STEM are quite frequent, the implicit biases and obstacles to women feeling welcomed are built right into the field to the point that they might as well have been the first priority of the tech specs for constructing the engineering field.

I could run through a lengthy list of examples of times when I felt isolated from my peers or struggled to find mentors with similar life experiences and backgrounds to my own, but we all know that it usually takes a rather small and relatively insignificant irritation to make us remember just exactly what we’ve been fighting against. 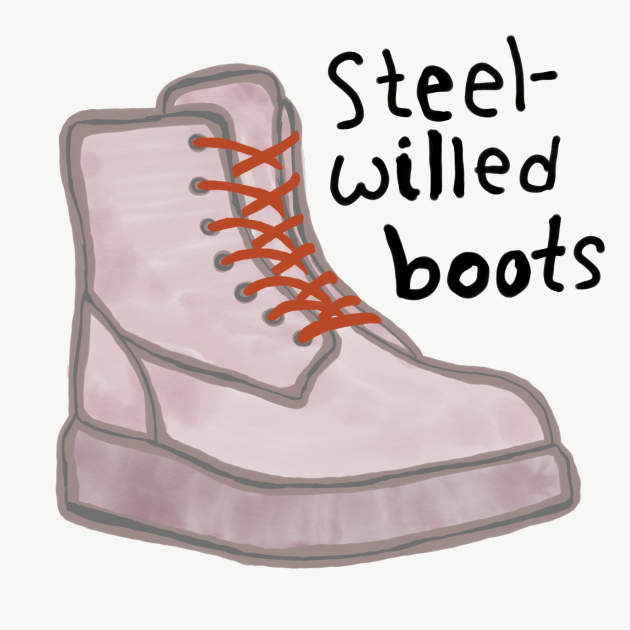 Steel-toed boots are quite common for any scientist taking part in work requiring hands-on experience with heavy machinery or field work. The availability of said shoes, however, is scarce if you happen to be searching for boots designed for women. Two steps forward, and one step back. The excitement of getting to do field work and put my four years of education to use was quickly staunched by the reality that, once again, the equipment meant to protect people doing this work…was never meant to protect people like me doing this work. These boots weren’t meant to be filled by me, and it’s not so much that they’re too big to fill as it is that they aren’t fit to serve their only purpose: to help me best fulfill my duties.

With steel-toed boots, you’ll often hear that finding a good fit is important because you need to be sure you can break those boots in before the boots break you. Engineering feels a lot like finding a new pair of steel-toed boots, but immediately being put to work and not being given any credit for the fact that you’re doing the same job as everyone else except dragging around clunky, extra weight that does nothing but slow you down and hold you back.

It would be easy to joke about how the stereotype of women and all of our shoes would sure come in handy during times like this. It would be easy to mention that, perhaps if there were more women and women-of-color role models to look up to, the STEMinists of tomorrow would at least have someone’s footprints to follow in, even if that trodden path is more of a stumble filled with plenty of pit stops and times when they just needed someone to lean on to keep their balance. It would be easy to make a joke about not fitting in to the field that makes you feel fulfilled, but that’s because of how hard it is to keep a straight face every day while dealing with these stressors. Today it’s a pair of boots, but tomorrow it will be one of the many other little bits and pieces of STEM that were designed to exclude people from devoting their life to it.

Until tomorrow, though, I’m going to laugh through the grimaces and pain as I break in these steel-toed boots. Because I’m determined to break them in, and not let STEM (or the boots) break me in the meantime.

National Center for Education Statistics. (2016). Table 318.45: Number and Percentage Distribution of Science, Technology, Engineering, and Mathematics (STEM) Degrees/Certificates Conferred by Postsecondary Institutions, by Race/Ethnicity, Level of Degree/Certificate, and Sex of Student: 2008-09 through 2014-15. Digest of Education Statistics: 2016 Tables and Figures.

Noonan, R. (2017, November 13). Women in STEM: 2017 Update. US Department of Commerce, Economics and Statistics Administration, Office of the Chief Economist.

Silbey, S. S. (2016, August 23). Why Do So Many Women Who Study Engineering Leave the Field? Harvard Business Review.