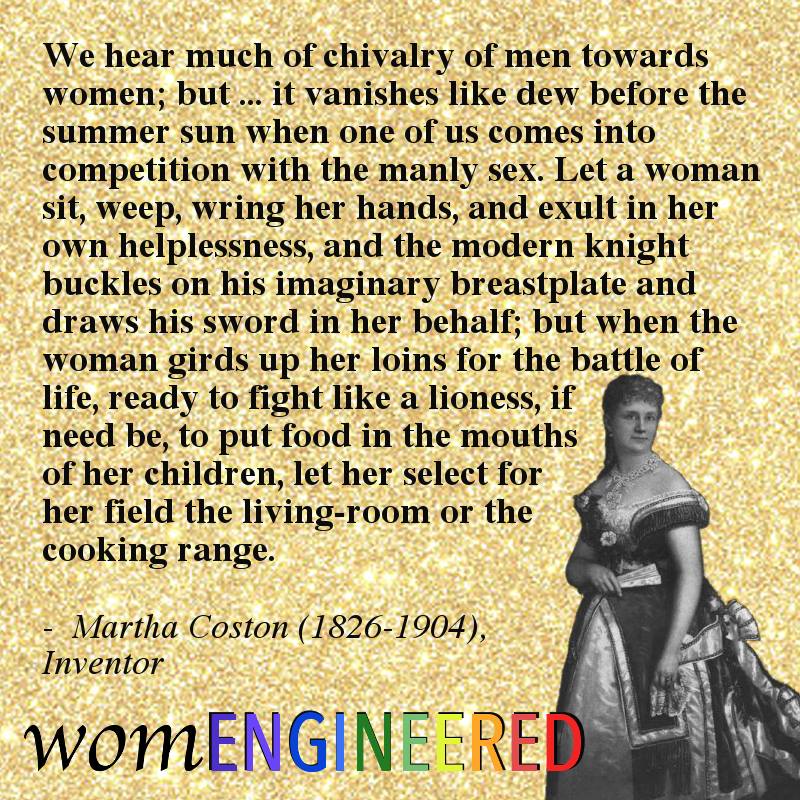 Martha Coston was an inventor who had an impact on the Civil War with her invention of the Coston Night Signals. Martha met her husband when she was just 14, while he was already developing his reputation as an inventor. Although the couple initially planned to wait until after Martha had finished school to marry, when he was offered a position in the Navy they decided to elope to prevent any potential separation.

🛠
Although Martha’s husband developed many useful inventions for the Navy, he was never compensated for his patents or given the recognition through pay or promotion he was promised. Martha stepped in as her husband’s health quickly declined from his work with chemicals in the laboratory, and was left a widow with four sons at only 21 years old. After spending much of her time caring for her family members as their health rapidly declined, Martha refused to give in to her grief and moved to make a career to provide for herself and her family in these hard times.

🛠
Martha initially hoped that the patents and inventions of her husband may allow her to finish developing a project, but was unable to find anything. Instead, Martha found incomplete thoughts and plans from her husband that she began to build on.

🛠
Martha perfected some initial plans regarding signaling techniques and produced a finished product using chemical compounds she had to ask some of her husband’s former Navy colleagues to test for her. Although the first flares she had created and sent for testing were ultimately much too weak and failed, Martha continued in her efforts. Spending years working with chemists to perfect her flares and securing a manufacturer for her signaling system took years but finally Martha was able to present her night flare signaling system and more flares were ordered for testing by the Navy.

🛠
During the outbreak of the Civil War, Martha secured a deal with the U.S. Congress to purchase her patent for $20,000 but ran into issues when her manufacturer had closed his factory to join the Army. Notice was sent to the commander of the Armies to have the manufacturer sent home in order to complete the orders.

🛠
Martha traveled to Europe to speak with the governments there in order to speak with them about purchasing her patent and adopting the system. Not only had Martha created this flare signaling system, but she also marketed her product and created a larger scale order within war systems.