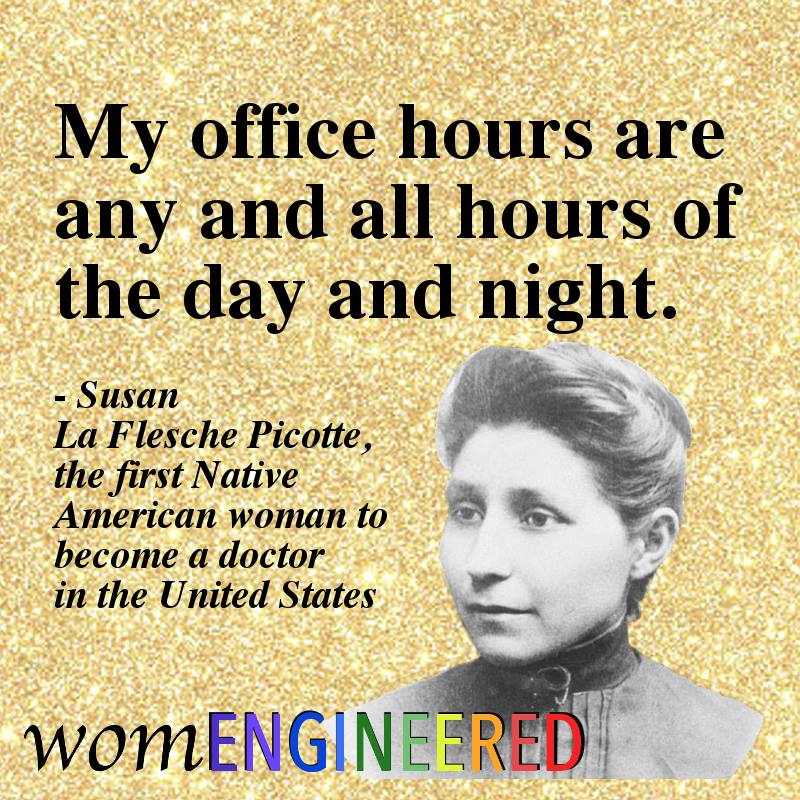 Susan La Flesche Picotte was the first Native American woman to become a doctor in the United States. Susan was born and grew up on an Indian reservation, which were often subjected to deplorable conditions of poverty and disease at the time. Her mother’s father, Dr. John Gale, was the first army physician in Nebraska and her experiences living amongst poor conditions on the Omaha Indian Reservation inspired her future work in medicine.

🔬
Susan was sent to school in the East, as her parents hoped that she would be able to benefit from the education that white children would have. However, the impact of her background continued to influence her as she saw the cultural upheaval, outbreaks of tuberculosis, alcoholism, and malnutrition affecting her tribe. Susan finished her schooling, securing funding from the U.S. Office of Indian Affairs and becoming the first person to receive federal aid for professional education.

🔬
After becoming the first Native American woman physician in the country, Susan returned home to work at a government-administered hospital caring for both white and Native American patients. Although she earned only a tenth of what a U.S. Army or Navy doctor would have, Susan used her own money to pay for supplies when government funding ran out.

🔬
Susan La Flesche Picotte grew up on an Indian reservation at a time when the Native American population was going through agonizing change. The U.S. Government was “subduing” the Indian population and relocating them on reservations, usually on land no one wanted. Living conditions were deplorable with disease and poverty. When Susan La Flesche Picotte was born in 1865, no one knew that in her fifty short years she would graduate from medical school with honors, marry and raise children, care for her alcoholic husband, open a clinic on the reservation, testify before Congress for better health conditions on Native American reservations, and start her own hospital.

🔬
Susan set up a private practice in Nebraska after marrying her husband and became a champion of professional women striving to have both a family and career in the 21st century. Beyond running a private practice, raising her two children, advocating for better Native American health care, caring for her husband and his alcoholism, Susan also joined the temperance movement and lobbied for prohibition on the reservation.

🔬
Throughout her life, Susan advocated for Native American health and rights. Susan La Flesche Picotte is an early trailblazer of the women’s movement, and her work as a physician along with her career achievements served as inspirations that allowed future women and Native Americans to follow suit.