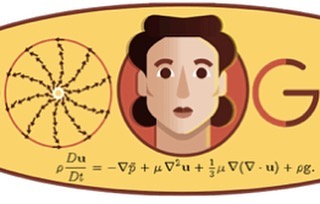 Google’s Doodle today celebrates what would have been Olga Ladyzhenskaya’s 97th birthday. Olga Lasyzhenskava was a Russian mathematician, whose father inspired her love of algebra (he was a mathematician, too!). Although he died when she was just 15 and her family was forced to sell dresses, soap, and shoes to make money, Olga graduated with excellent grades. However, due to her father being accused of being an “enemy of the state,” Olga was not allowed to attend Leningrad State University. Olga taught math to secondary school students for years before attending Moscow State University and went on to earn her PhD. Olga authored over 250 papers during her career.