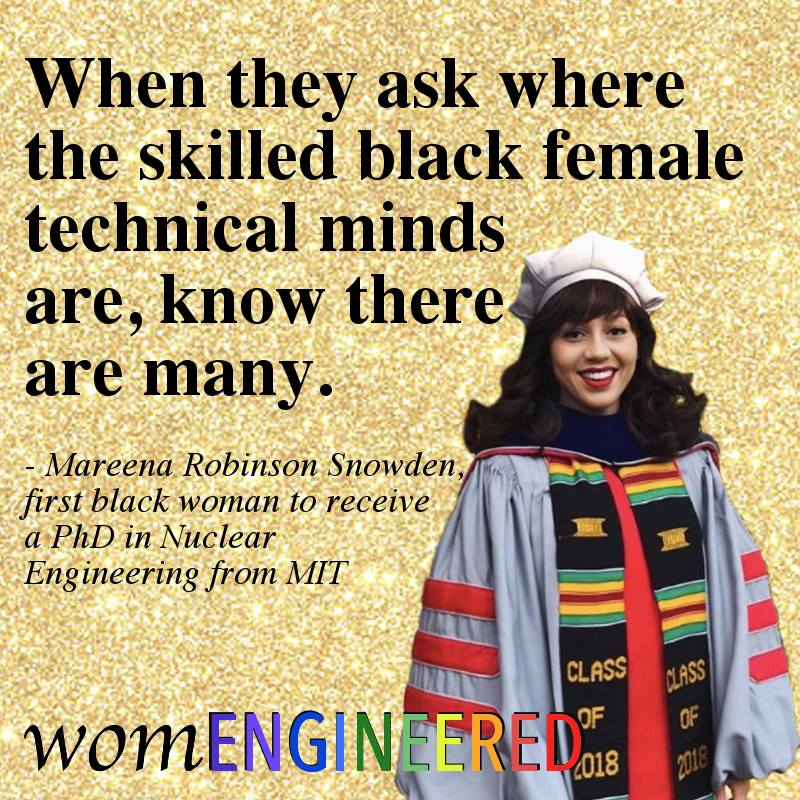 🔬👩🏾‍🎓👩🏾‍🔬
Mareena Robinson Snowden is the first black woman to earn a Ph.D. in nuclear engineering from Massachusetts Institute of Technology (MIT). Although she hadn’t considered engineering when she was younger and actually was nervous of STEM, her math and physics teachers in high school encouraged and supported her to expand her interests past the humanities by showing her how to develop skills for STEM and grow out of the mindset that she was bad at math.
🔬👩🏾‍🎓👩🏾‍🔬
Only 2% of physics bachelor degrees went to African-Americans in 2015 (according to the American Physical Society), and Mareena was recruited by colleges hoping she would join their physics departments. Mareena made a deal with her dad to try physics, with the agreement that if she hated it she would change her major.
🔬👩🏾‍🎓👩🏾‍🔬
As an undergraduate, Mareena participated in MIT’s summer research program and first was introduced to nuclear engineering. After applying to 8 different graduate schools, Mareena was only accepted to MIT’s nuclear engineering program. Mareena’s passion, enthusiasm, and knowledge quickly helped her stand out, even if it did take time for her to adjust to MIT. As the only black person or woman in nuclear engineering classes at times, it was hard for Mareena to adjust after coming from a historically black college but found support in cultural groups and organizations as well as kept pictures of strong female role models in STEM. One of those women was Katherine Johnson, who Mareena had a picture of up on her wall after years of struggling to name role models in STEM who looked like her.
🔬👩🏾‍🎓👩🏾‍🔬
Mareena is now at the Carnegie Endowment for International Peace, where she focuses on nuclear security. Mareena hopes that her own accomplishments will inspire other young people to pursue careers in fields where they might be a minority.