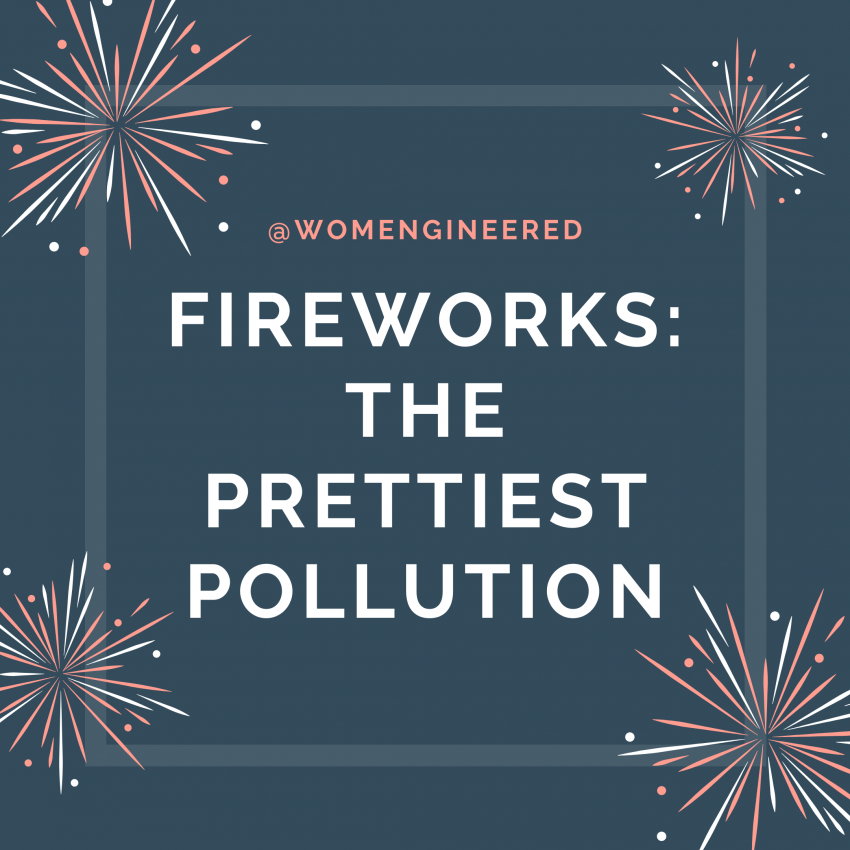 Fireworks may be the prettiest form of pollution out there.

What are Fireworks Made Of?

Fireworks and firecrackers are made of oxidants, flammable materials, flame agents, and metallic compounds.

Fireworks use metal salts and explosives in order to create the pyrotechnic displays we’ve come to expect at major public celebrations. To create fireworks, these metal salts and explosives combine with oxygen during the combustion process, undergoing chemical changes. Combustion releases smoke and gases, like carbon dioxide and carbon monoxide — some of the primary greenhouse gases behind climate change.

Oxidizers are chemical compounds that are rich in oxygen and are used to assist in burning and combustion. The main oxidizers used in commercial fireworks are potassium nitrate/perchlorate/chlorate, which can affect the thyroid gland by inhibiting iodine uptake and are highly soluble in water.

The United States Geological Survey (USGS) found that elevated levels of perchlorate in groundwater and surface water were likely caused by fireworks displays. However, as late as June 18 of this year, the United States Environment Protection Agency (US EPA) has resisted regulating perchlorate, allowing it to continue being produced as fireworks waste and contaminating drinking water, by declaring that perchlorate doesn’t meet the regulation criteria under the Safe Drinking Water Act (SDWA). Perchlorate in drinking water requires advanced treatment technologies and cannot be easily removed by boiling water.

The American Fireworks Standards Laboratory (AFSL) has already prohibited the use of certain metals because of their known toxicities, including Pb, As, and Hg salts. In its 2013 Explosives Regulations, Canada listed these as chemicals of concerns and issued regulations for the sale of these restricted components.

How Do Fireworks Pollute the Environment?

Fireworks lead to pollution in the air, water, and soil that is toxic to humans and animals.

Fireworks have been shown to increase the concentration of airborne pollutants up to three times the background level. With newer technology to enhance visual effects, fireworks have actually become more dangerous — including oxidizers used to reduce noise levels and create more intense explosions as well as heavy metals used to generate a wide array of colors. Additionally, a 2001 study published in Nature links fireworks displays with the production of ozone, a secondary pollutant and greenhouse gas.

The Air Quality Index (AQI) measures daily concentrations of fine particulate matter and other pollutants. The AQI has tracked increases in the concentrations of airborne pollutants following events involving fireworks, like the Diwali festival of lights in India, New Years Fireworks in Honolulu, lantern lighting festivals in Beijing, Chinese New Year in Nanning, and Bastille Day in France. The Hawaii State Department of Health (HDOH) has issued health advisories to the public for the period following New Year’s due to the increased levels of particulate matter (PM) in the air because of the fireworks.

The heavy metals used in fireworks have been found to significantly increase in ambient air following fireworks displays. Excessive exposure to some heavy metals have been shown to cause mental dysfunction, neurological disorders, and the development of neurodegenerative disorders. Heavy metals are also persistent in the environment. Even short term exposure to very high PM levels after fireworks have been shown to cause asthma (sometimes fatal!) as well as other respiratory problems. Short-term and long-term exposure to smaller particulate matter, like PM2.5 (<2.5um), has been linked to cardiovascular- and lung cancer-related deaths.

In the US every year, Independence Day fireworks release about 60,000 metric tons of carbon dioxide. That’s about the same as the emissions of 12,000 gas-powered cars.

How Are We Exposed to Fireworks Pollution?

Toxic smoke and dust produced by the explosion of fireworks can be inhaled and subsequently damage lungs and cause respiratory issues. The particulate matter produced from fireworks and the exposure to human cells has been shown to adversely affect human health, particularly the lungs and respiratory system. Carcinogenic chemicals released by fireworks can enter the body through contaminated soil or water.

Fireworks displays typically take place over bodies of water, like our oceans, rivers, and lakes, causing the resulting debris to enter these water sources. These pollutants can impact fish and other aquatic life, as well as potentially move up the food chain through bioaccumulation in marine life. Fireworks can also pose a significant danger to pets and other animals. Unused or residual components of fireworks that remain in the area can be ingested by animals, which can then become poisoned by the hazardous chemicals used in them, such as oxidizing agents and heavy metals.

What are the Results of Exposure to Fireworks Pollution?

The same metals used to give fireworks their brilliant colors and effects can also seriously harm people and animals.

What Can We Do?

Like most sustainable actions, not using something is typically the most environmentally friendly option. With fireworks, avoiding events with big pyrotechnic shows is the best way to avoid supporting the pollution and health effects that they can cause.

Going with alternatives to pyrotechnic shows can reduce the potential pollution and health impacts. Laser light shows can also provide color light shows but without the dangerous chemicals combusting in the air.

Ultimately, getting big consumers of fireworks to use alternatives is the most effective way to reduce pollution. Disney has started using compressed air to launch fireworks at Disneyland, which reduces the smoke and particulate matter in the air as well as the perchlorates that can enter bodies of water.

Researching more safe and biodegradable components to replace heavy metals, oxidizers, and propellants can reduce the pollution these events cause. However, for all the efforts involved in finding a replacement for one portion, there are still many elements that need to be addressed.

At the end of the day, living sustainably and making environmentally friendly decisions includes evaluating the aftermath of the things you do. When you buy takeout, you should consider where the plastic container will end up. When you buy clothing, you should consider how long the item will last and whether you could have purchased it used. So when you buy a ticket to a fireworks show, take a second to consider how the waste
will impact the environment and health of animals and humans.

Hirsh, Sopie. “Are Fireworks Bad for the Environment? Here’s What You Need to Know for July 4th.” Greenmatters, 1 July 2020, https://www.greenmatters.com/p/fireworks-environmental-impact.